Pheasants originate from Asia and spread across the world through importation. Many people believe that the Romans initially brought these majestic birds to Britain, and the rest is history.

There are 35 pheasant species, each with a large number of subspecies.

Let’s take a look at the 11 most beautiful pheasants.

In fact, they are one of the most beautiful pheasants. Females look similar to Red Golden Pheasants. They have dark brown coloring with barring throughout their feathers.

You can distinguish the two species by looking at their legs. Red Goldens have yellow legs, while Lady Amherst has bluish legs.

During courting, a ruff of feathers surrounds their silver heads that have black barring. Male Lady Amherst Pheasants have long, grey tails speckled with longer, orange feathers that make a border.

Lady Amherst Pheasants are perfect for private aviaries. They are relatively easy to care for and are strong birds.

Their long tail feathers are delicate and can break easily, so you must give them enough room to live. Avoid crossbreeding with other pheasants as it will impact the pure bloodlines.

The Dark Throat Golden Pheasant is an aviary favorite because it’s one of the most beautiful pheasants. Unlike the Lady Amherst Pheasant, they don’t need a massive aviary.

You can keep Golden Pheasants in small groups with a single cock and three hens or in pairs.

They also live with other bird species quite happily, especially waterfowl, doves, and pigeons.

They have long black and white speckled tails with red underneath.

The females are darker than the males and similar to the Lady Amherst Pheasant. Care must be taken to keep them separate to prevent crossbreeding.

Ringneck pheasants have long tails and necks and are the most common pheasant species.

They are popular aviary birds because they don’t need a lot of care. Ringnecks are large, like a chicken, and have long legs.

They thrive in agricultural areas and need room wherever you keep them.

Males have green heads with a deep red surrounding the eyes. There’s a white collar around their neck, and they have a coppery body with long tail feathers in the same color.

Females are brown with black spots that uniformly appear all over their bodies. They have shorter tails than the males and dark brown legs.

Ringneck Pheasants are low maintenance because they smoothly adapt to new environments.

Sportspeople prize these birds because they have incredible flying capabilities and impressive coloring.

Cinnamon Golden Pheasants are magnificent aviary birds and one of the most beautiful pheasants.

They need little care because they are strong birds. You will need ample space for them, but they quickly adapt to life with other bird species like doves and peafowl.

Male Cinnamon Golden Pheasants have bluish wing feathers with white tips, unlike the Red Goldens that have pure blue and yellow feathers.

Their tails are a similar color and length, although the Cinnamon Golden has more orange.

Expert breeders teamed up to develop this species using genetics. They are smaller in size than other pheasants, which makes them agile and high fliers.

Kansas Ringneck Pheasants have green heads with a white band around their necks.

They have purplish feathers that cover their bodies, and their wings have spatterings of grey. They have long, brown tails that are barred. It’s very similar to the coloring of a Chinese Ringneck.

The Manchurian Cross Pheasant, another Ringneck species, is a magnificent bird and one of the most beautiful pheasants.

These well-natured birds are easy to care for and are hardy birds. They adapt to most areas but are happiest in agricultural lands that grow soy, corn, wheat, or other grains.

Grasslands and wetlands are a must for roosting purposes.

Manchurian Cross Pheasants have dark blue heads with white beaks and a distinctive white feather near each ear.

The white collar around their neck leads to deep auburn belly feathers and golden speckled wings. They have long, tan tails.

Britain developed the Melanistic Mutant Pheasant over 100 years ago using the DNA of Ringneck Pheasants.

They have adapted to the environment and form a rich part of the ecosystem. Their blue-green iridescent coloring makes them one of the most beautiful pheasants in the world.

Male Melanistic Mutants have greenish-black plumage with an iridescent sheen. The sunlight makes them shine blue, purple, green, or rust when it hits their feathers.

They have far superior survival capabilities than their originators. Females are similar in color but darker.

The Yellow Golden Pheasant doesn’t occur in the wild.

They have yellow instead of red feathers surrounding their heads. This distinguishes them from Red Goldens. Yellow Golden Pheasants have brown wings instead of blue and a long, light brown tail with dark spots.

Females are a light golden color and have brown barring.

In the 1950s, Alessandro Ghigi developed the Yellow Golden Pheasant in Italy. The species arrived in the U.S. in the 1960s and was very expensive.

They are now more common and make their homes across the country.

Yellow Golden Pheasants are popular aviary birds because they are easy to care for but need a lot of space.

Silver Pheasants are originally from the mountainous regions of eastern and southern China and were introduced to Hawaii later.

They thrive in grasslands, deciduous forests, or bamboo thickets. They do need a large aviary with plenty of shade and some bushes.

Males are white with black lines. They have black feathers along their bellies and a cascading white tail.

They have a bare, red area around their eyes and matching legs. That’s how to tell them apart from Kalij Pheasants.

Silver Pheasants are established in aviculture and make popular additions to aviaries.

They are extremely easy to raise, so they make the perfect birds for beginners.

Males can sometimes be aggressive, but it’s not common.

Reeves Pheasants are rather unique and one of the most beautiful pheasants.

Their coloring widely varies, but they are still easily recognizable. These magnificent birds made it into the Guinness Book of World Records because of their long tails.

They can grow as long as over six feet. They need large aviaries to roam and prevent damage to their feathers.

Reeves Pheasant males have golden plumage with black markings. The darker colors aren’t always black. They sometimes appear green, and others develop a band on their faces.

Unfortunately, Reeves Pheasants are quickly disappearing in the wild because of deforestation.

People are trying to restore populations by releasing them in Hawaii, but these methods haven’t worked. The IUCN believes there are only about 3,000 to 5,000 species in the wild.

They love dense forests with lots of bamboo or rhododendron. These beautiful pheasants migrate through the Himalayan mountains.

Male Temmink’s Tragopan Pheasants are one of the most beautiful pheasants, and even birds, in the world.

They have orange and crimson coloring across their bodies. Their faces are blue with black feathers that form a mask around their eyes. They have short tails and pink legs.

Mating season is when male Temmink’s Tragopan Pheasants are at their most beautiful.

They have fleshy horns that appear from beneath the feathers on their heads. You can only see them during this time. They also have a blue, crimson, and white lappet that’s so large it hides the rest of its body.

These are, in our opinion some of the most beautiful pheasants.

Of course, beauty is in the eye of the beholder so let us know which ones you would add to the list. 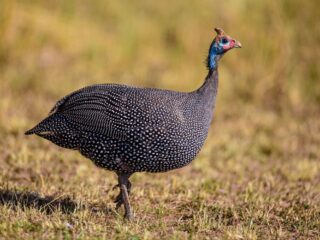 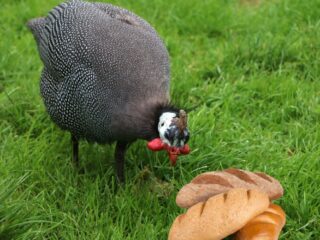 Hey there! My name is April and I’ve owned chickens in some form or another since I was 17 years old. I have a B.S. in Agriculture from Cal Poly Pomona where I studied topics like farm animal reproduction, genetics, nutrition and more. For several years I hatched and sold chicks of a variety of different breeds (and species) from my farm in Southern California. While I’ve currently downsized, I know how important it is to get information when you need it